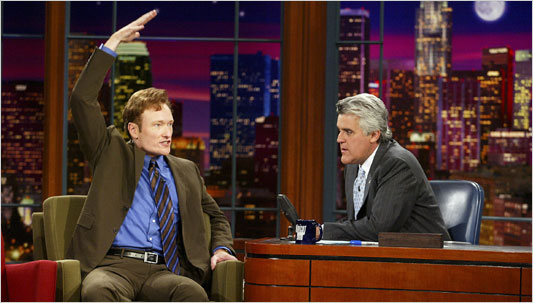 While former Tonight Show host Conan O’Brien is moving on with his career by embracing Twitter and headlining a hit comedy tour that visits Boulder on Sunday, David Letterman isn’t finished talking about O’Brien’s well-publicized feud with Jay Leno and NBC.

“It was good fun and I couldn’t get enough of it…and I wish it was still goin’ on,” Letterman told Dr. Phil last week when they discussed the Jay Leno/Conan O’Brien controversy that captivated and entertained America a few months ago and ended in 17-year NBC late-night veteran O’Brien effectively being kicked off the air.

“I’ve known Jay since 1975 and, when we were first hanging around, everybody loved Jay,” Letterman said. “He’s so funny, so engaging, so compelling…but then there’s also this other side of him where he’s just a complete boob. He can’t help himself.”

Those are fairly strong words, but nothing compared to the nightly whuppin’ Letterman put on Leno earlier this year when the public discovered that Leno, the 60-year old yawn-inducing host of The Tonight Show, demanded that heralded position back after spending less than a year in retirement (aka the 10pm Jay Leno Show). Since his childhood in Massachusetts, O’Brien had dreamed of being the next in a long line of respected and hilarious Tonight Show hosts dating back to Steve Allen, Jack Paar and Johnny Carson; signing a deal in 2004 to replace Leno in 2009 after 17 years of Leno commandeering the Tonight Show and O’Brien handling Late Night afterwards, O’Brien had his chance. Before he knew what hit him, that chance was gone…faster than you can say “Big Jaw” (Letterman’s derisive nickname for Leno).

Substituting Leno’s bland, middle-of-the-road monologues, gutless interviews and edgeless house band with racy and zany skits, cutting remarks on current events, an impressive jazz group and a masturbating bear, the antonymous O’Brien attracted a younger, hipper and arguably sharper Tonight Show audience when he moved from the 12:30-1:30 spot to the 11:30-12:30 position in June of 2009. The ratings went down considerably, but every other Tonight Show host experienced a temporary dip in ratings at first, too. Replacing a national icon ain’t easy, but dealing with a network that has no faith in you and no interest in supporting you is even tougher.

In early January, after just seven months of hosting the Tonight Show, O’Brien was suddenly given two options by NBC, with no notice: either give Leno his own show from 11:35 to 12:00 and go on just after midnight, or leave the network. A few days later, O’Brien released a written statement revealing his unflappable position:

“I believe that delaying The Tonight Show into the next day to accommodate another comedy program will seriously damage what I consider to be the greatest franchise in the history of broadcasting,” he said. “The Tonight Show at 12:05 simply isn’t the Tonight Show. I cannot express in words how much I enjoy hosting this program and what an enormous personal disappointment it is for me to consider losing it…but I cannot participate in what I honestly believe is its destruction.”

Although it was reported that NBC paid O’Brien $45 million to settle his contract and basically pay him not to appear on television for a while, the behavior of both Leno and NBC was despicable. Duly, support from other late-night heavies like Letterman, Jimmy Kimmel and Craig Ferguson appeared immediately. And it was brutal.

“Al-Qaeda is claiming responsibility for the damage at NBC,” Letterman quipped on January 12th just minutes after O’Brien announced his decision to leave NBC rather than cave in to their disadvantageous demands. Repeatedly referring to Leno as “Big Jaw,” Letterman remarked “at 12:05, it wouldn’t be The Tonight Show; it’d be The Tomorrow Show. Anytime there’s a big stink like this, it’s all about money.”

Letterman went on to insult the NBC executives who went through with what was essentially the firing of O’Brien, saying “don’t kid yourselves – if they knew what they were doing, they wouldn’t be there.” He also suggested a show called Law & Order: Leno Victims Unit to replace the short-lived 10pm-11pm variety show Leno hosted before decided to take back The Tonight Show.

Even funnier, Jimmy Kimmel came out dressed up as Leno for his first edition of Jimmy Kimmel Live since the controversy went public, telling his audience “Hello, my name is Jay Leno, and let it hereby be known that I’m taking over all the shows in late night – beginning with this one!” Kimmel also joked that it was great to be on ABC, aka “Always Bump Conan.”

Kimmel later appeared on Leno’s show and continued feverishly ripping Leno and his inexcusable shenanigans, only this time to his face – but Leno just changed the subject time after time.

Essentially, Leno walked away from The Tonight Show in 2009 after almost 20 years at the helm, having earned hundreds of millions of dollars, and voluntarily handed the show over to a younger successor who made his way through the trenches of later-night talk show hosting just as Letterman had to. In 2004, when he announced his impending retirement, Leno called The Tonight Show a “dynasty,” saying “you hold it and hand it off to the next person. Conan, it’s yours! See you in five years, buddy!” Then Leno took the show back after half a year, ending both O’Brien’s dream-become-reality and Leno’s respectability.

But now, funnier than ever, the 47-year old O’Brien is barnstorming across the country with his “Legally Prohibited From Being Funny On Television” tour, featuring performances by O’Brien, his usual house band (minus its leader Max Weinberg), young comedians like Reggie Watts, and loads of surprise guests, including a certain self-servicing bear. O’Brien, who was just interviewed by 60 Minutes for his first television appearance since the Leno scandal, joined Twitter to promote the tour and now has almost two million followers on that site and Facebook combined, and his teamcoco.com blog is a hit.

O’Brien recently inked a deal with TBS to host a show on the cable network beginning next year, but reveling in his refreshing new experience as a touring performer is good enough for the poofy-haired Harvard graduate for the time being.

“No matter what I do, tonight your asses are mine,” O’Brien told a capacity crowd at San Francisco’s 3,000-capacity Masonic Center two weeks ago. “You can’t change the channel.”

O’Brien plays Boulder on Sunday and Denver on Monday.