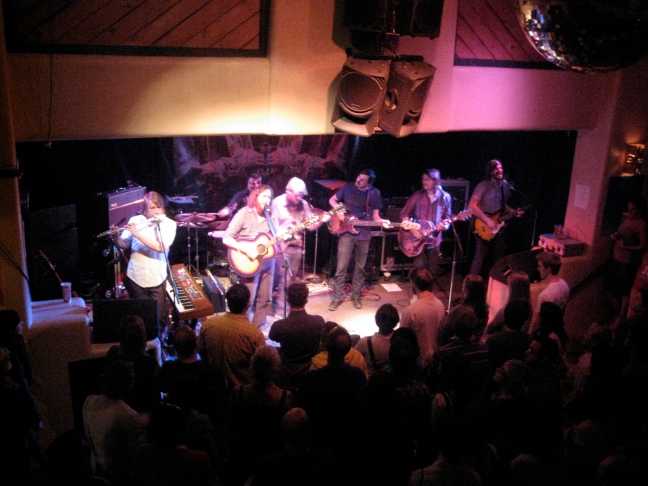 “We’re not that band,” Pulido joked. “And we’re working on a new one called ‘Bosco.'”

Midlake is going through some growing pains at the moment—or growth-spurts, depending on your point of view. Last night at SFBC, the band had four guitarists, one bassist, one keyboardist/flautist and one drummer; the last time the Texas folk-rock outfit toured, it numbered only five musicians total, and now it’s gone the way of Broken Social Scene. More fittingly, Midlake has gone the way of the E Street Band, with a slew of rhythm guitarists playing the same chords, and one lead-guitarist tempering things with sinewy guitar-talk.

Surprisingly, Midlake only played for about an hour last night, which was an obvious outcome for anyone who saw singer/guitarist Tim Smith roll his eyes at the sight of a half-full small-town venue. Still, the group graced Santa Fe with spirited versions of songs from its new album, The Courage of Others, and satisfied everyone with new, darker versions of tunes from Midlake’s 2006 breakout The Trials of Van Occupanther. Whereas the latter album elegantly juxtaposed Fleetwood Mac and CSNY, The Courage of Others—and Midlake’s new sound in general—draws from Medieval inspirations and heavier ’70s influences such as Jethro Tull and Led Zeppelin.

Although Midlake is one of those bands that seems to play better at a big, sold-out venue in New York or San Francisco and often lack the necessary energy to adequately rock a pub in New Mexico, it’s always a treat to see a premier American indie act, if only for an hour.