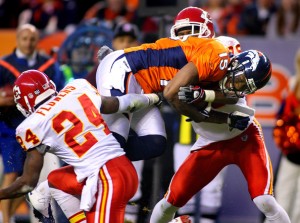 Broncos In Decline, Steelers Hit the Hardest
by Adam Perry for Boulder Weekly
12/23/2010

The Denver Broncos—a franchise most remembered for winning the Super Bowl twice with John Elway at quarterback and fielding over a dozen playoff teams from the ’80s through the mid-’00s— are now in shambles. Kid-like coach Josh McDaniels, 34, started last season—his first as a head coach in the NFL—6-0 and then helped the Broncos lose 17 of their next 22 games. That string of ineptitude represented Denver’s worst stretch of football since 1971-72 and ended with McDaniels’ firing, which the team announced via Twitter (yes, really) early this month.

The young Bill Belichick disciple’s .393 winning percentage was the worst for a Denver head coach since Lou Staban (1967-71). With over 70,000 devoted fans buying tickets for each game at Invesco Field, it’s understandable amid such an embarrassing string of losses—and news that McDaniels’ staff had spied on the San Francisco 49ers during an October practice—that Broncos owner Pat Bowlen pulled the trigger and fired McDaniels with four games remaining.

But how did things go so wrong so fast?

With so many key players gone, it’s no surprise the Broncos are subjecting their fans to terrible losses like the historic 59-14 drubbing the Oakland Raiders handed Denver this fall.

“In large part, this is because they have allowed their head coaches to run the personnel operation,” Denver Post sports columnist Dave Kreiger told me in a recent conversation. “Since coaching and personnel are both full-time jobs, they have brought less expertise to bear on final personnel decisions than many other teams. That’s what needs to change.

Whoever ends up running the show for the Broncos next year—assuming interim head coach Eric Studsville is replaced at season’s end—the new coach might want to sprint to the nearest bookstore for inspiration and wisdom concerning sustained success in the NFL. Chad Millman (ESPN The Magazine) and Shawn Coyne recently released the captivating book The Ones Who Hit the Hardest: The Steelers, the Cowboys, the ’70s and the Fight For America’s Soul, and anyone interested in pro football can learn about winning—and then winning a whole lot more—from this gritty, enlightening gridiron tome.

As Millman and Coyne note, although Pittsburgh has won more Super Bowls (6) than any other team, from the franchise’s inception in 1933 until its unrivaled run of four Super Bowl wins in six seasons (1975-80) the Steelers were basically the laughing stock of the NFL. Back then, baseball’s Pirates were the competitive team from Pittsburgh, if you can believe it. But the astute stewardship of original owner Art Rooney’s sons led to the drafting of a seemingly endless list of future Hall-of-Famers in the early 1970s, including Terry Bradshaw, Lynn Swann, Jack Lambert, Franco Harris and many more. Within a few years the Steelers had the most storied defense in NFL history, not to mention four championships and the love of a distressed city.

U.S. Steel—based in Pittsburgh—was once the largest corporation in the world, and steelworkers came to define Southwestern Pennsylvania. When the steel industry began its steep decline in the ’70s—Pittsburgh’s population has gone from about 700,000 to 300,000 in the past 40 years—the Steelers’ sudden rise to greatness provided a huge lift that has repeatedly carried the city in the many tough years since. It’s no coincidence that the esteemed Steelers franchise to this day continues to draft players as tough as they are talented—take current stars James Harrison, Ben Roethlisberger, Troy Polamalu and Hines Ward, for instance—in an effort to make sure Pittsburgh’s most treasured sports team embodies Pittsburgh’s blue-collar reputation.

Interestingly, up until the Steelers started winning in the early ’70s, their underpaid players used to have it almost as bad as the steelworkers, whose experience of living “in the terror of the mill” Millman and Coyne so deftly describe. For many years the Steelers practiced on a mud-pit field in the South Hills of Pittsburgh about two miles from where I grew up, but after Three Rivers Stadium opened in 1970 and new coach Chuck Noll built a dynasty based on a vicious defense and a relentless running game, things changed quickly.

Pittsburgh’s running attack was led by the mellow, afro-wearing Harris and a Vietnam veteran named Rocky Blier, who literally won Super Bowls with shrapnel in his leg. Lineman “Mean Joe” Greene and linebacker Jack Lambert, who Greene calls “so mean he doesn’t even like himself” in The Ones Who Hit the Hardest, led Pittsburgh’s menacing “Steel Curtain,” the legendary defense that ruled the NFL in the ’70s. The Steelers’ two Super Bowl wins over the glamorous Dallas Cowboys in the ’70s represented “the triumph of blue collar over white collar,” according to Millman and Coyne. Maybe that was true for some, but what’s certain is that nothing has ever made the football-obsessed city of Pittsburgh as proud as when the Steelers win another Super Bowl trophy.

Though they’ve only won two Super Bowls (in 2006 and 2009) since 1980, the dependably competitive post-’60s Steelers (who’ve already cracked double-digit wins this season) have never experienced a string of losing like the one Denver fans are currently being tormented by. Krieger thinks the fact that the Steelers have always been a mom-and-pop operation is a big part of their consistently winning ways.

“Everything changed in 1970, when they drafted [quarterback] Terry Bradshaw,” says Krieger, who was a Steelers fan as a kid “because of the uniforms.”

“[Bradshaw] was an enormous talent, first pick in the draft, the reward for a quarter-century of incompetence.” [Actually it was 37 years of routinely horrendous football before the Steelers drafted Bradshaw.]

“But it wasn’t just him. They did an amazing job drafting in the early ’70s. Their ’74 class is still the only one with four Hall of Famers in it, as far as I know [Swann, John Stallworth, Lambert and Webster].”

“They’ve remained competitive since then because of good leadership,” Krieger concludes. “A single family has owned them throughout their history. From 1969 to 2004, they had two coaches [Noll and Pittsburgh-born Bill Cowher]. And they’ve consistently drafted well.”

In the end, it seems clear what the Broncos’ front-office could learn from reading The Ones Who Hit the Hardest.

“Plenty of stuff about how to run a franchise,” Krieger says. “Also that it really helps to have an extremely talented quarterback who can run in a pinch. Someone like, say, Jay Cutler.”

5 thoughts on “Broncos in Decline, Steelers Hit the Hardest”