Better Than: Discovering, ticket in hand, that you don’t have a seat at the Super Bowl

Like the Pogues, Portland-based superstars the Decemberists bring a good helping of traditional music (in America, we call it “folk”) to the louder and more explosive world of rock ’n’ roll. But even in his most unruly phases—singing “this was my happy ever after / so motherfucker kiss the ground”—the wildly talented and dangerously drunk Shane McGowan always had one foot firmly in the Joycean lineage of epiphanic, original wordsmithing.

Colin Meloy? Not so much.

Meloy—who looks not unlike a nerdy wrestler—was, more than anything else, ostentatious on the big Boulder Theater stage last night. Lyrics such as, “These cliffs of Dover / so high you can’t see over,” were sung with a preened, cringe-worthy faux-English tilt. And when the frontman of an internationally famous band with a just-released #1 major-label album (The King is Dead) the majority of his adoring audience knows all the words to greets them by announcing, “We have a new album out called The King is Dead,” ostentatious is about the only appropriate adjective. Picture Mick Jagger telling an audience, “We are the Rolling Stones.”

Not that the Decemberists, who’ve been around for over a decade now, are poor songwriters or put on a below-average show. “Calamity,” an end-of-the-world narrative reminiscent of R.E.M. for several reasons, and “Down by the Water” highlighted their Boulder set by juxtaposing the expectantly energetic with the playfully and poetically dire. And the group’s capable musicianship—notably the gorgeous organ and pedal steel of Jenny Conlee and Chris Funk, respectively—added the confident chops necessary for a successful marriage of folk and rock.

But something—who knows, maybe the intoxicating mountain air Meloy mentioned—made the Decemberists seem trite. It could’ve been the hit-or-miss lyrics presented as scripture, or the band’s long-winded pre-recorded introduction by the mayor of Portland, but I’m fairly certain it was the Decemberists’ incredible opening act, the pastoral Vermont trio Mountain Man. 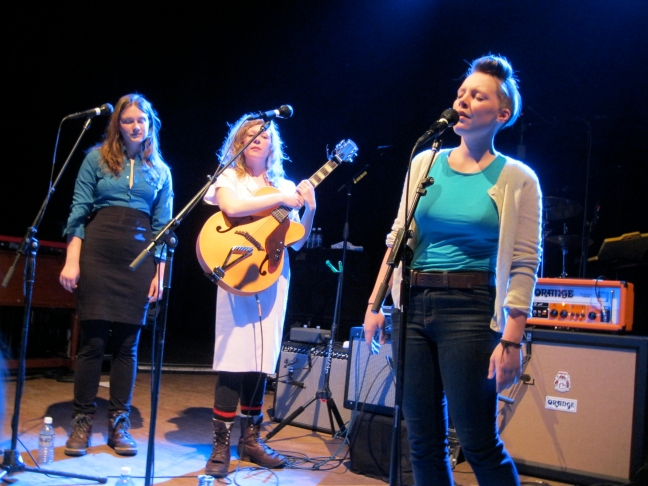 Humbly emerging to find their places in front of three microphones amid the Decemberists’ substantial setup, Mountain Man’s all-female lineup (Alex Sauser-Monning, 24; Amelia Randall Meath, 22; and Molly Erin Sarle, 21) quickly hushed and captivated the sold-out Boulder Theater crowd. And not because Meath talked fondly of her two summers at a hostel in Boulder as a teenager and the group’s pre-show meal at Lucille’s.

“Eclipse my hips / I’m all yours tonight,” the trio deftly harmonized during “Dog Song,” drawing brief snickers from some of the pre-teen Decemberists fans pressed against the stage. “Hurry up, baby / or get out of my sight.”

The three members of Mountain Man, who have only been singing together for about two years, have created something inherently fun and intriguingly sexy, but the perfect timing and endlessly rehearsed harmonies displayed last night also bring a touch of the sacred to the band’s concerts. Not surprisingly, the young Decemberists faithful became fans quickly.

Meath, who told me after the show that her new under-shaved haircut is an effort “to bring Tank Girl back,” held the silently amazed audience in near rapture with a solo take on the Tom Waits classic, “Green Grass.” At that moment it was obvious most of the capacity crowd forgot which act was the headliner.

CRITIC’S NOTEBOOK
Personal Bias: Nerdy wrestlers don’t really do it for me.
Random Detail: Most songs on Mountain Man’s Made the Harbor are a cappella—some feature an acoustic guitar—but a wide-body Gretsch electric was passed between Sauser-Monning and Sarle at the Boulder Theater.
By The Way: The Decemberists have a new album out called The King is Dead

One thought on “Review: The Decemberists with Mountain Man”