I’ll never forget meeting the poet Aimee Herman on my first day of classes at Naropa University in the winter of 2008, in a workshop led by Maureen Owen, who famously co-directed the St. Mark’s Poetry Project in late-’70s Manhattan. Herman had wild hot-pink hair, dark glasses, a prolific obsession with putting her thoughts on paper, startling confidence and — most obviously — an endless fascination with not just human sexuality but our bodies in general.

As we were roughly the same age, we both feverishly wrote poems that seemed to always include references to sex and the city, and we both had come from harsh but incredibly inspiring places — San Francisco’s Mission District for me, Brooklyn for her — to study writing in the tranquil and relatively isolated setting of Boulder. My ego (about 10 sizes too big at the time) told me I was meeting the female version of myself. Our connection was instant and strong, but it quickly became clear — especially as I continued refusing to read my work aloud while Herman hosted the Folsom St. Coffee Co. open mic and constantly performed — that this outgoing, assiduous, talented young writer was anything but comparable.

Not many writers, for instance, regularly write poems on their own bodies, or perform with their upper torso wrapped in yellow “caution” tape.

Now happily returned to Brooklyn, where Herman’s “heart was born,” thankfully not much has changed. Not even the hair. And what’s most amazing to me is not just that, six years after graduating from Naropa’s writing program, Herman still writes every day (she consoled my contrasting lack of output recently by saying “as long as you’re breathing you’re writing”). It’s more that Herman — who teaches at Bronx Community College and Boricua College, hosts a monthly erotica open-mic in the East Village, habitually collaborates, and is a bona fide fixture on the New York poetry scene — never ceases to be involved.

“Part of finding community is also making community,” she says, “so that’s why I love to host spaces, safe spaces, for other people to express themselves. And, in turn, it feels good to enter other people’s spaces, where I can perform and elaborate on The Word, which has led me to doing more performance art.”

“Coming back to Brooklyn a couple years ago, I didn’t really know anybody,” the poet explains. “I had to start all over.”

Herman says the reason she immediately gravitated toward so many creative New York scribes is that “the people I get along with the most are poets and writers, because they understand, and they pay attention. They notice things. Those are the kind of creatures I want to be around.” 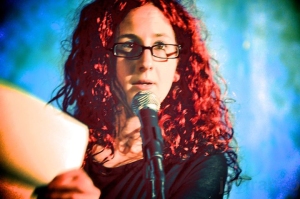 The self-described “performance poet,” who has released numerous solo chapbooks and the full-length to go without blinking (BlazeVox Books), is also doing a lot of work in publishing, from guest-editing issues of poetry journals such as And/Or to working on larger projects, like the just-released The Body Electric (Ars Omnia Press).

Inspired by “I Sing the Body Electric,” the timeless New York poet Walt Whitman’s distinctly American mid-1800s ode to all things physically and spiritually male and female (or genderless), Herman’s new book collects around 50 diversely visceral original works on sex and the human body, some directly inspired by Whitman. The idea for a Whitman-inspired collection of poems about the body came from fellow New York poet Mike Russo, who also chose the black-and-white nude photos included in The Body Electric, and it took Herman about a year to sift through poetry and prose submissions.

“[It was] an interesting process,” she says. “I was really pleased with what was sent to me, and I’m so proud of what’s in there because it’s all really beautiful and eclectic work. Most of the reason why it took so long [to edit] is that some people were sending in erotica, which is fine, but … it’s very easy to write bad erotica, and that’s what I was getting a lot of. I wanted to see risks taken on the page, and when I started to see [submissions] looking beyond just body and just language of the body, these submissions all stirred me in some way.

“And that’s why I write. I’ve read so many fantastic books of poetry and fiction that call my skin to feel like the writer is digging into me. That’s really exciting.”

Though Herman is physically attracted only to women, she says she has no problem identifying with writing that speaks of the body, and of sex, from the straight perspective, which is represented in The Body Electric somewhat less than the homosexual perspective.

“I write erotica and a lot of my erotica has been heterosexual,” she says. “I don’t necessarily feel that there’s a homosexual sex act or a heterosexual sex act. It’s extremely fluid. It really depends on the body. It’s for the humans who are engaging. I don’t feel excluded.”

One would probably assume that Herman became keenly interested in the human body at a very early age, but she never got “The Talk” and says that sex was never discussed in her house growing up (in Manalapan, N.J.). Having been raised Catholic, though Herman was raised Jewish, I can certainly understand her intimation that she most likely became so intensely curious about sex and the body because of a “true unawareness of what existed.”

“When I was a kid I was frightened by sex,” Herman admits. “I was curious and frightened at the same time, so as my friends got older and were into boys … I didn’t understand it. But now, as I’ve gotten older, I’m so deeply turned on by what turns other people on, and now that’s become my curiosity. My relationship with sex is extremely complicated, but I think that’s why I write about it so much. It helps me understand my relationship with it.”

Herman, who earned her M.F.A. in creative writing at Long Island University, has a singular ability to captivate a room full of people with her slow, smart and shockingly sincere deliveries of poems about life inside the body and mind of an independent, uncompromising young woman. Even lines from her blog, on which she posts daily, such as “It is difficult not to search for the flaps of skin that may be used like deadbolts to lock out the ones who crawl their way in” (Sept. 23), have a tendency to, as Herman says, “dig in” to a reader. And her time in Boulder, though it often felt foreign, helped shape that vivid, open voice.

“Boulder, to me, was the last place to live because it felt very small, and I wasn’t used to that,” Herman says. “It’s also extremely white, which I’m also not used to. I guess that’s why I love Brooklyn and New York so much, because you feel like you are living deep inside of a globe, where you’re surrounded by every part of the world. So many cultures. You walk two blocks and suddenly you’re in another world.

“Boulder, although the smallness in many ways is lovely because you run into people much quicker and feel like you know everyone, when I moved [there] I moved slower, which is necessary, and I think I found the hippie that was always longing to come out of me. And it has remained, which feels really good. And that I will forever be grateful for. I feel like I found myself because I was surrounded by so many wonderful poets, and it’s a magical place in so many ways.”

The Body Electric and to go without blinking are both available at Amazon. com, and Herman’s blog can be read at aimeeherman.wordpress.com.