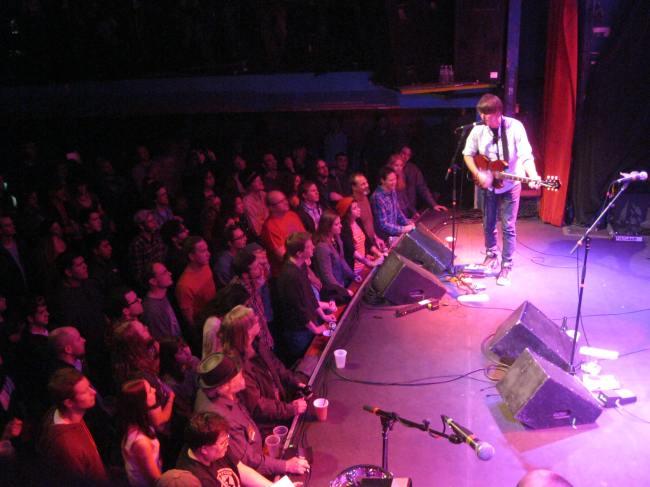 Stephen Malkmus, with his three-piece band the Jicks, was pretty masterful last night at the Gothic Theatre in Denver, playfully soloing over ’60s-influenced indie-rock with a much more psychedelic, and musically challenging, vibe than Pavement, the band he founded 25 years ago in the Northern California town of Stockton.

Just as it was disappointing that Pavement’s heralded reunion tour had to be moved from the 1st Bank Center, an arena, to the Ogden Theater when it hit Colorado a few years back, it was surprising that Malkmus was relegated to the Gothic in Englewood this time around, rather than the Ogden or even the Fox, where he could’ve more aptly dedicated the hilarious hippie-bashing song “Jenny And The Ess-Dog.” Just a couple songs in to the Malkmus’ energetic two-hour set, which included a long encore of Pavement (“Father to a Sister of Thought,” etc.) and Steve Miller (“Come On and Dance”) covers among other gems, Malkmus dedicated “Jenny” to “Boulder people” and clearly reveled in lines like “They’ve got a dog she named Trey / a retriever with a frayed bandana around his neck / Trey has a window into their relationship.”

Malkmus and multi-instrumentalist Mike Clark played red Gibson SG’s most of the night, harkening back to the Grateful Dead’s short-lived late-’60s period of well-rehearsed, open-but-intricate, bright, creative and bombastic psychedelia. Indeed, Malkmus’ flashes of melodic improvisation on the new album Wigout at Jigbags, which made up most of the material he played last night, repeatedly recall the most vibrant and, well, cognizant periods of Jerry Garcia’s guitar playing. For a songwriter gregarious enough to rhyme “Hades” with “Slim Shadys” and “Tennyson” with “venison,” that kind of fun, engaging musicality – the Jicks toy with song structures and jocular, unpredictable chord changes, whereas Pavement toyed with tunings and eccentric solos over more basic sequences of chords – is captivating in a live setting.

The Jicks’ stage banter was no less worth the trip to the outskirts of Denver, from Malkmus’ “We love Wyoming; black ice is a silent and deadly killer, the lung cancer of the road” to bassist Joanne Bolme’s hilarious run through a section of Styx’s “Come Sail Away,” which got the crowd and the whole band chanting that guilty-pleasure classic’s chorus.

The Jicks have been together longer than Pavement ever was, and it shows. They get soulful, dark and jammy, proving the V.U./Sonic Youth rule – that just a handful of bands, in my opinion, have ever been the exception to – that the rock musicians with the most interesting, exciting and tasteful on-stage improvisations are almost never in jambands.

Oh yeah, and no disrespect to the two-level Gothic, which is one of the best venues Colorado has, from the crystal clear sound to the lack of bad sightlines (like an old-time baseball park). For someone who usually bikes down to Denver from Boulder and buses back in the wee hours, Englewood’s just not accessible. Especially for a music geek like me, whose first time seeing Malkmus was with Pavement on the 1995 Lollapalooza tour, when I was 14. You know, the Lolla with a baby-faced Beck, plus Hole, Sonic Youth and the mighty Jesus Lizard. Holy shit I’m old.