When a music-geek favorite such as Jolie Holland comes to town, the Larimer Lounge on a summer Thursday is pure Denver: tattooed, homegrown punks hanging at the bar and (mostly) transplants — hippies, middle-aged alcoholics, young white-collar music lovers and everything in between — milling around on the back porch waiting for the headliner’s set.

Last night, local duo Plume Varia and the energetic trio Shy Hunters opened for Holland at the Larimer. Having virtually nothing in common with the 38-year-old Holland’s well-known countrified Brooklyn alt-folk (besides the fact that two-thirds of Shy Hunters is also in Holland’s band), the two openers drew only 20 or 30 of the roughly 90 people in attendance into the performance space.

It was a slow night until Holland, who had been sitting on the front patio on her smartphone off-and-on for several hours before chatting with fans at the merch table, started playing guitar over the house music around 11 p.m. That was ostensibly Holland’s cue to the embattled sound engineer that she and her band were ready to go.

The Texas-born singer-songwriter and guitarist/violinist — whose work as a solo artist and with the Be Good Tanyas has memorably traversed blues, folk, country, soul and rock — repeatedly paid tribute to the “loud, drunk crowd,” as she called it, and made no mention of the obvious, which members of her exceedingly youthful band had discussed with me at length outside the Larimer before the show: Her current tour represents a serious musical departure.

Guitarist Adam Brisbin, writing out setlists for the group, told me how the musicians on Wine Dark Sea — Holland’s edgy new album — were generally excited about adding a touch of the avant garde (shades of noise-rock and the Velvet Underground) to Holland’s work.Wine even features a two-drummer experiment (only one of which was present at the Larimer); it’s Holland’s most musically ambitious album.

Flanked by two lead guitarists (the Marc Ribot-esque dervish Brisbin on an eccentric little Harmony and Indigo Street playing clean, articulate blues on a white Telecaster), Holland switched between a gold Les Paul and a violin throughout the night, doing her captivating Texas-meets-Brooklyn thing while her free-flowing band occasionally reached Ornette Coleman-worthy heights of madness. 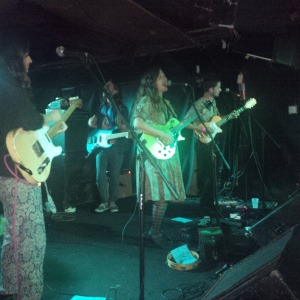 The dusky new tune “Palm Wine Drunkard” led off the hour-and-a-half set, matched fittingly with a cover of labelmate Tom Waits’ “Who Are You.” Both clearly stated Holland’s current musical intentions, which attempt to juxtapose world-class lyrics and singing with a whole bunch of electric guitars and risky, almost free-jazz drumming that can either take a beautiful song and it make it holy or swallow it whole. The latter, caused not by the drummer alone but by the rest of the band, at times thinking it was playing “Expressway to Yr Skull,” did happen a few times at the Larimer, causing Holland to throw her hands up, but more often than not the bombastic group did come together impressively.

Surprisingly, the highlights of the evening were Holland’s takes on “Do Me Justice,” a tropical dance tune by the late West African musician S.E. Rogie, and the bold ’60s soul number “The Love You Save.” The jazz-rock noise was hit (mostly) or miss, but Holland’s band really nailed the aforementioned sultry covers — one upbeat, one slow and sexy.

Holland’s singularly beautiful singing, to which she’s added a quiver that thankfully moves more like Sidney Bechet’s trumpet than Joan Baez’s voice, is generally more at home inside subtle, confidently graceful music — her stunning original “Do You?” was also a treasure last night — than cacophony. But Holland is just like her heroes — ambitious — and Denver was blessed last night when her ambition, talent and tastefulness met with her band’s virtuosity.