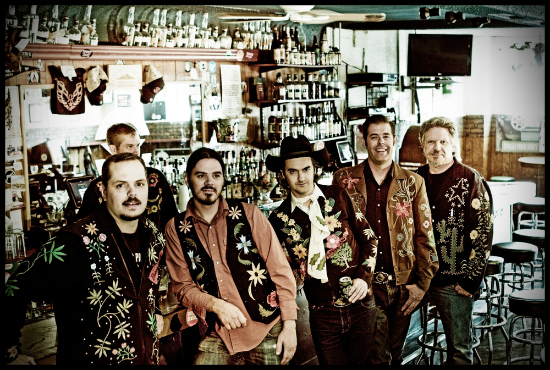 Casey James Prestwood and the Burning Angels Nominated for Ameripolitan Award
by Adam Perry for Westword, 1/1/2015

The term “Ameripolitan” has been most notably championed by outspoken Texas singer-songwriter Dale Watson. But in recent years, other traditionalists, fed up with mainstream country music and looking for a way to separate themselves from the likes of Luke Bryan and Taylor Swift, have adopted the term as well. Some of those people founded the Ameripolitan Music Awards, the second installment of which will be celebrated this February at the Paramount Theatre in Austin, Texas. Denver’s Casey James Prestwood and the Burning Angels just received a nomination, in the category of Best Honky Tonk Group, and Prestwood says it’s not just “pop country” artists who have been giving country a bad name lately.

“Being a Colorado guy, I’m sure you see it all the time,” Prestwood explains. “‘Oh, I play country’ — and you find they’re a jam band or more of an Americana band, but they sound like Weezer. I think it’s cool that Dale Watson has tried to rebrand it and sort of redefine what it is, with honky-tonk and Western swing and outlaw country. Modern country has no resemblance to country at all.”

Prestwood and his Burning Angels — in Manuel Cuevas suits and cowboy boots — have been spreading authentic country music, highlighted by pedal-steel guitar, around Colorado just about every weekend for the past five years, and they’re well known in Tennessee and Texas. The bandleader, who grew up all over the music-rich South, is a veritable country-music encyclopedia and has performed and recorded with many country legends. He pulls no punches when discussing the state of country music.

“I don’t think I’d be hurting anybody’s feelings by stating the obvious — that it seems like country today is just mainstream pop being produced out of Nashville. I don’t think Nashville or the CMAs have 100 percent shunned [authentic country]; there are some steel guitars and fiddles every once in a while. But I think those are guaranteed givens with the Ameripolitan thing.”

Being nominated for an Ameripolitan Music Award is a big deal, and Prestwood hopes the band is invited to perform at the February second annual ceremony at the Paramount in Austin.

“We’re keeping our fingers crossed,” he says. “It’s pretty cool. I think it being in its second year, it still has a lot of growth and potential to become something pretty awesome. The nomination might make some people in Colorado more aware of what we’re doing. Maybe if they’re fans of Dale Watson and bands they hear on Willie’s Place on Sirius XM or something like that, maybe we’ll gain some fans out here that wouldn’t normally come out and see us.”

The Burning Angels will open for Whitey Morgan and the 78s (voted Best Outlaw Group at the inaugural Ameripolitan Music Awards last year) on January 31 at the Marquis Theater in Denver. And Prestwood, who got deeply autobiographical on last year’s Nashville-recorded Honky Tonk Bastard World, says a new album is already in the works.

“I already have probably between ten and twenty song ideas, and if you were to come see a Burning Angels show, you’d see a couple of those we’ve kept in the flames live. We’ve got four songs in the bank right now, but we’ve got an idea of doing singles for this record — three or four singles over the course of a year — and then releasing those as a full-length with some cuts that didn’t make it onto the B-sides. It’s definitely a continuation of Honky Tonk Bastard World, with a couple of new flavors mixed in, as usual.”